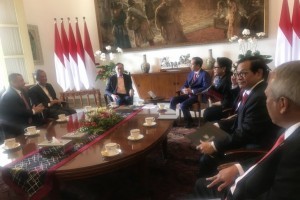 Speaking to reporters after the meeting, Indonesian Minister of Foreign Affairs Retno Marsudi, who accompanied the President during the meeting, said that Anwar Ibrahim’s visit to President Jokowi was a form of friendship as well as to exchange thoughts.

“Pak Anwar visited the President because he has been elected President of the People’s Justice Party (PKR) replacing Wan Azizah,” Retno said.

The People’s Justice Party is a centre-left multiracial political party in Malaysia formed in 2003 by a merger of the National Justice Party and the older Malaysian People’s Party (PRM). The party is now part of a coalition that formed the Malaysian Government after a 60-year-long tenure by the Barisan Nasional (BN).

Retno added that Anwar Ibrahim and President Jokowi discussed several issues during the meeting, in which Anwar conveyed greetings from Malaysian Prime Minister Tun Mahathir Mohamad and reaffirmed the Prime Ministers commitment to strengthen relations between Malaysia and Indonesia.