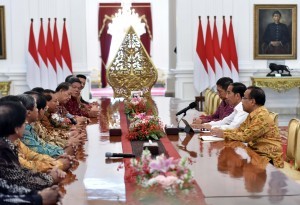 President Jokowi receives the Central Committee of the Indonesian Pentecostal Church (PGPI) on Friday (3/11), at the Merdeka Palace, Jakarta

Central Committee of the Indonesian Pentecostal Church (PGPI) on Friday (3/11) at the Merdeka Palace met with President Joko Jokowi Widodo to invite the President to attend a National Working Meeting (Rakernas).

On that occasion, the Committee also gave supports to the Governments programs. We support all programs implemented by the Government. We acknowledge that the President has done great jobs in developing infrastructures in all regions in Indonesia, particularly on the eastern part of Indonesia, PGPI Chairman Jacob Nahuway told the reporters after the meeting.

Jacob admitted that he was touched by the Governments programs and mentioned one of the concrete evidence is that the Government has enabled people in Papua to enjoy the same fuel prices as people in Jakarta. Therefore, we hope there are more concrete programs for the benefits of the Republic of Indonesia, Jacob said, adding that the Church always prays to God to bless the President so he can address the problems faced by the country.

Jacob further said that President Jokowi is very grateful for PGPI and considered the Committee as the Governments partner.

In the meantime, President Jokowi hopes that the Indonesian Pentecostal Church can contribute to maintain the unity and solidarity of Indonesia so that the nation would not be torn apart simply because of different skin color, different hair textures (i.e. straight hair and curly hair), and religious beliefs.

Beside informing the President regarding the organization of Pentecostal Church in Indonesia, how many churches managed under the Committee, as well as the number of worshipers, Jacob also told the President about the plan to hold a PGPI National Working Meeting on 7 to 9 November 2017 at the Indonesian Bethel Church of God of Rose of Sharon (Gereja Bethel Indonesia Mawar Saron), in Kelapa Gading, Jakarta.

We also invited the President to open the event and he said he had allocated his schedule to attend the event, which is scheduled to be held on 13 to 15 November next year, Jacob concluded.