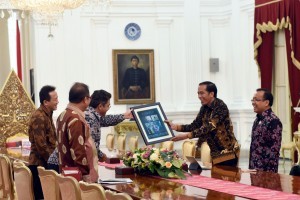 President Joko Jokowi Widodo on Tuesday (15/11) at the State Palace welcomed the founder and the CEO of a technology company, Plug and Play, Saeed Amidi.

Minister of Communication and Informatics Rudiantara who accompanied the President at the meeting said that the purpose of Amidis visit to Indonesia is to follow up the previous discussion with the President on February at Plug and Play headquarter, at Silicon Valley, Los Angeles, US. At that time, President Jokowi invited Saeed to invest in Indonesia as the country is planning to expand in e-commerce sector.

In accordance with the declaration of the 14th Economic Policy Package, the road map of e-commerce, he also welcomed the idea and just had a discussion with the President, said Rudiantara.

According to the Minister, because Plug and Play has branches in several countries, the Government requests that the investments in Indonesia need to be done with joint venture companies.

So, the venture capital is located abroad, only the money enters this country. However, we asked Saeed Amidi and Plug and Play to do joint investment in Indonesia, the Minister said.

Previously, Plug and Play together with GAN Kapital (a local investment company) launched Plug and Play Indonesia at Jakarta (14/11).

Furthermore, this company will act as the accelerator means for the start-up companies in Indonesia that focuses on mobile and financial technologies sector that are strengthened with the platform of cooperation innovation.

Plug and Play Indonesia will develop facilities for the alliance company through digital- based solution and will also invest in 50 companies in Indonesia.

Chosen alliance companies will be granted fund support, endorsement, and several other supports in accelerator programs for 3 months. It is scheduled to be launched in January and we will gather a number of big companies, said the Minister.

Rudiantara added that the soft launching has already been held on the other day, and Astra also has shown commitment to work together with Plug and Play. In addition, there will be also 5 universities to join as well as certain number of International Corporation.

Plug and Play is an accelerator digital platform for the start-up, which focuses on financial technology sector that already has branches in over 22 countries.

There are currently more than 200 corporate partners, investors, universities, and many more that engages in retail sector, financial technology, Internet, media, and cloud.

For the record, GAN Kapital is an Indonesian investment company that focuses on investing to technology-based start-up companies.

Also attending the meeting were Minister of Communication and Informatics Rudiantara, Minister of State Secretary Pratikno, Head of Creative Economy Agency (Bekraf) Triawan Munaf, and CEO of GAN Kapital Anthony Pradipta. During the meeting, Saeed also handed over a figure that contains a photo of the President taken in Silicon Valley. (FID/OJI/ES)