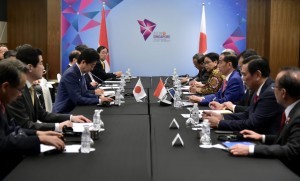 President Jokowi in a meeting with Prime Minister of Japan Shinzo Abe, Thursday (15/11).

Indonesia and Japan have cooperated in various infrastructure projects for many years. Jakarta Mass Rapid Transit (MRT) namely Moda Raya Terpadu is one of the cooperation projects carried out by the two countries.

MRT Phase I will be completed in March 2019 and the groundbreaking of MRT Phase II will also be conducted in the same year, the President said.

In addition to that, President Jokowi expressed his concern about Japans policy on palm oil certification. Indonesia has implemented the ISPO (Indonesian Sustainable Palm Oil) certification and expected that this certification could be well received by the Japanese Government.

In the meantime, Indonesia sees a number of potential cooperation that can be established with the Japanese Government. Among these are investment and development of electric cars and lithium batteries, development of tourism industry in the 10 New Bali areas and maritime cooperation.

I would like to invite His Majesty to together materialize these cooperations by using the momentum and enthusiasm of 60 years of Indonesia-Japan bilateral relations, President Jokowi concluded. (BPMI / EN)