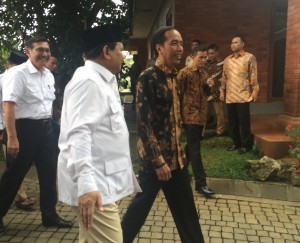 The marching band that has been previously prepared, reverberate national anthem Indonesia Raya to welcome the arrival of the President who was accompanied by Coordinating Minister forMaritime Affairs Luhut B. Pandjaitan and Minister of State Secretary Pratikno. After the Indonesia Raya was reverberated, they had a closed meeting continued by lunch.

After the 2-hour meeting, President Jokowi was invited to ride a horse and wore riding boots as well as cowboy hat. The President rode a white horse named Salero while Prabowo rode a brown horse named Prinsipe.

While riding the horse, the President responded to the journalists questions. The President explained that his visit is an amicable gathering since he once promised to come to Prabowos house in Hambalang.

When we had lunch, Pak Prabowo gave me a hat, as a present, the President said. (UN/ES)(MMB/YM/Naster)