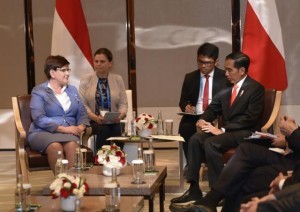 At a meeting with Prime Minister of Poland Beata Szydlo at Conrad Hotel, Beijing, on Sunda (14/5) afternoon, President Joko Jokowi Widodo encouraged cooperation enhancement in a number of sectors, among others economy, maritime, and people-to-people contact.

Hence, I encouraged to finalize the MoU of Higher Education between the two countries, the President said.

In the meantime, in tourism sector, the President pays special attention to the increase of Polish tourists to Indonesia in 2016 (27,903 people) that increased by 42 percent.

The President was happy because now there is a tourism package Warsawa-Denpasar-Warsawa using a charter plane Lot Polist Airlines.

I also expect a support from Poland to the plan to open a direct flight Jakarta-Warsawa-Jakarta, the President said.

On that meeting, President Jokowi also expressed his appreciation to the Poland for their agreement to give support to each other on the candidacy of both countries at the UN Security Council. Indonesia runs for the candidacy of 2019-2020 period, while Poland for 2018-2019 period.