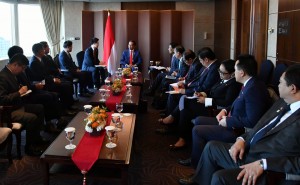 During the working visit in South Korea, President Joko Jokowi Widodo was scheduled to meet with four CEOs of Korean major companies in South Korea.

On Monday (9/10), the President met with Lotte Groups Vice Chairman Kag-hyu Hwang, who said that he intends to boost investments in Indonesia.

(Investment from South Korea) is on number three in Indonesia, the President said, adding that South Koreas investment in Indonesia ranges from the basic industries such as steel and iron, petrochemical, and aluminum.

Previously, Chairman of the Indonesian Chamber of Commerce and Industry (KADIN) Rosan Roslani said that he brought 104 entrepreneurs to attend this business forum. There are still trading and investment potentials between Indonesia and South Korea that has not been tapped, Rosan said.

In the meantime, Chairman of the Korean Chamber of Commerce and Industry Yongman Park emphasized that there still many investment opportunities in Indonesia; thus cooperation between entrepreneurs in the two countries countries entrepreneurs is important.