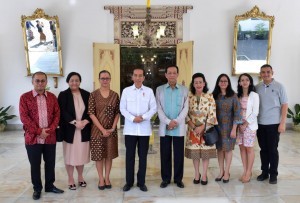 President Jokowi on his visits on Yogyakarta Palace, Friday (28/9). (Photo by: BPMI).

Upon arriving at the palace at 09:15 local time, the President and his entourage was welcomed by Gusti Kanjeng Ratu (GKR) Mangkubumi and GKR Condrokirono, both of whom are the first and second daughters of Sri Sultan Hamengkubuwono X with GKR Hemas.

President Jokowi was scheduled to meet Sri Sultan and GKR Hemas in the first morning of his working visit and followed by breakfast together. The meals provided include black sticky rice, gatut, lupis, and cenil.

During the breakfast, the President and Sri Sultan as well as his spouse talked about many things, ranging from the story of their grandchildren to the discussion about the developing issues in the country. We talked a lot about our grandchildren and about issues related to the country. That’s all, President Jokowi said.

Meanwhile, the Sultan said that his relation with President Jokowi had been established for a long time, when President Jokowi was Mayor of Solo; thus, both of them still communicate to each other until now.

Mutual visit became something that is important for me to maintain relations, Sultan said, adding that the exchange of ideas among them is common, considering that both of them are within the government.

To conclude the visit, the President also took a photo with the family of Yogyakarta Palace. Also present on the photos were GKR Maduretno, GKR Bendoro, and KPH Yudhonegoro. (BPMI/EN) (GWH/EP/Naster)