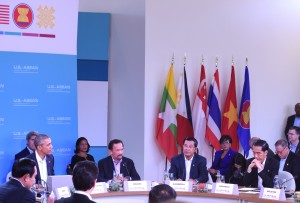 President Jokowi in a meeting of US-ASEAN Summit, in California, the United States

On the second session of US-ASEAN Summit 1st retreat on Monday (15/2) local time, President Joko Widodo attended a meeting hosted by President Barack Obama that was also attended by three Chief Executive Officers (CEOs) on digital economy in the US, among others, CEO of Microsoft Satya Nadella; CEO of IBM Ginni Rometty; and CEO of CISCO Chuck Robbins.

Indonesian Minister of Foreign Affairs Retno Marsudi who attended the meeting said that the three CEOs delivered their views on the innovation and entrepreneurship issues.

Retno also said that they stressed the importance of technology to governments to make breakthroughs so that they can serve the people better and improve the economy.

The CEOs also emphasized the important role of partnership between the governments and private sectors in a form of public-private partnership as well as the importance of regulatory environment.

Responding to the CEOs views, President Obama shared President Jokowis opinion, that technology must empower small and medium enterprises and close the gap in the development.

According to Obama, the point is that technology must bring benefits to the people and to realize that, education is the key.

For the record, Indonesia has great potentials on digital economy sector.

Indonesia also has assets to boost its digital industry, among others, the number of middle class which continues to rise; greater access to the technology including smartphones and young populations which are very progressive and hundreds of startups that have increased and continued to grow in recent years.

Furthermore, the Indonesian Government has also rolled out the National E-commerce Road Map worth US$ 130 billion and created 1,000 tecnopreneurs with the business value worth US$ 10 billion in 2020. This move is considered a major step to boost technology innovation to bring benefits to the people. (TKP/SLN/UN/EN) (RAS/EP/YM/Naster)