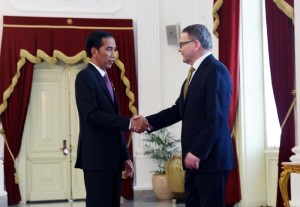 President Jokowi meets with Minister of Foreign Affairs of the Czech Republic at the Merdeka Palace, Jakarta (25/2)

President Joko Jokowi Widodo on Thursday (25/2) at the Merdeka Palace, Jakarta, received a courtesy call from the Minister of Foreign Affairs of the Czech Republic, H.E. Mr. LubomírZaorálek.

In the meantime, Retno said in her bilateral talk with her Czech counterpart at the office of the Indonesian Ministry of Foreign Affairs in Jakarta, the two countries have agreed to sign two bilateral agreements, including the agreement to waive visa requirement for diplomatic and official passport holders as well as attempts to expedite bilateral consultation to increase people-to-people contact.

In the economic sector, Retno said that economic cooperation between Indonesia and the Czech Republic has increased.

For the record, in 2015, trade volume was around US$ 260 million; yet the figure has yet reflectedthe potentials that the two countries have.

Retno addedthat in the next several months, the Czech Republic would negotiate with the European Unionfor Indonesia through the EU comprehensive economic partnership agreement.

Through all these measures, we hope we can increase people to people contact between the two countries in political, economic and socio-cultural fields, Retno said.

It is planned that the delegation will also visit Yogyakarta besides Jakarta, she added.

The minister added that in the context of multilateral, it is hoped that Indonesia andthe Czech Republic to support each other.

Indonesia also asked for the support from the Czech Republicto become a permanent member of the UN Security Council for the period of 2019-2020, the Minister concluded. (DID/EN (EP/YM/Naster)