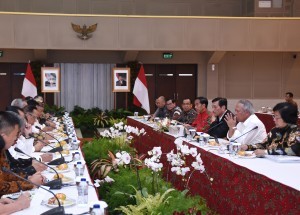 On the occasion, President Jokowi admitted that the Citarum River is of particular importance as it is the source of water for about 27.5 million inhabitants, both in West Java and DKI Jakarta, and provides drinking water for population of Jakarta, which accounts for approximately 80 percent.

“We have held 14 meetings discussing issues of Citarum and tonight we ask for input and suggestion from you all,” the President said.

The President is concerned because there are approximately three thousand industries, and mostly, the industrial wastes were dumped into Citarum River.

Therefore, the President considered, the dredging done in the Citarum River, which has been done several times, will not give results if the upstream is not tilled properly. Likewise, the industries are not properly managed. “Of course, from the upstream, middle, to downstream, this will be done jointly by using the funds from the State Budget (APBN) and Provincial Budget (APBD). We have agreed, by private and international support as well,” the President said.

The Government, the President went on to explain, has made a timeline of action for Citarum during 2018. It is estimated to be completed in 7 years. “It takes a very long time, but we have to do it,” the President said.

According to the President, the Ministry of Public Works and Public Housing has built a retention pond to overcome the existing floods in Dayeuh Kolot and also its surrounding areas. In addition, we will complete the tunnel floodway this year.

“This one is of particular significance, but if not followed by the arrangement in the upstream, I do not think it means anything,” the President said.

The President also said there were approximately 2,400 forest encroachers, almost all of whom are potato farmers, carrot farmers. We should seek a solution to move their production from potatoes producer to other environmentally- friendly products. (SM/GUN/ES) (MUR/YM/Naster).