President Jokowi Meets with ICMI to Discuss Issues of Diversity 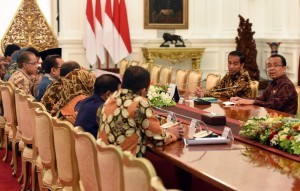 Members of the Indonesian Muslim Intellectuals Association (ICMI) led by its Chairman Jimly Asshiddiqie on Monday (23/1) at the State Palace met with President Joko Jokowi Widodo.

ICMI Chairman Jimly Asshiddiqie said during the meeting, in addition to report the result of ICMIs National Working Meeting (Silaknas) in December last year, they also discussed the latest development in the country, which is the many issues related to the countrys diversity. We said that diversity is the fact of life for our nation and no one can erase the Indonesian characters of the people, our plurality, Jimly told the reporters after the meeting.

Nevertheless, Jimly admitted that it is very difficult to hope that there will be no problems in managing diversity.  What matters is, Jimly said, the current situation must be managed appropriately especially ahead of the upcoming Simultaneous Regional Elections. It is our hope that after the Regional Elections are done, anti-plurality sentiments must be stopped. It must be managed well. Tension among groups must be eased; otherwise, it will be difficult to build harmony, Jimly said, adding that unity and harmony are the highlight during the meeting between ICMI and President Jokowi.

Jimly further said that ICMI also pledged to continue giving inputs to the Government for the benefits of the state and the nation.