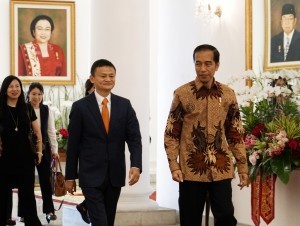 President Joko Jokowi Widodo meets with Alibaba Group as well as its co-founder and executive chairman Jack Ma regarding the implementation of the next Asian Games in 2022 which to be held in Hangzhou, Peoples Republic of China.

Jack Ma comes to Indonesia to attend closing ceremony of the Asian Games because in 2022 Hangzhou, the city where Jack Ma lives and where Alibabas headquarters located, will host the Games, Minister of Communication and Informatics Rudiantara said after accompanying the President to welcome Alibaba Group in the Garuda Room, Bogor Presidential Palace, West Java, Saturday (1/9).

The meeting, Rudiantara continued, also discussed start-up matters because Jack Ma is the advisor of a steering committee on e-commerce road maps in Indonesia.

We discussed many things, such as the problems of talent, human resources, Rudiantara said while adding that he also proposed to develop a kind of Jack Ma Institute in Indonesia to develop local talents. Until now, talents needed, according to the Minister, come from existing Unicorn start-up companies from foreign countries. Therefore, the Government aims at making Indonesia as a talent market center for countries in the region. Talent is the number one issue in the world because of the rapid growth of digital economy, Rudiantara said.

Furthermore, according to the Minister, the discussion with Jack Ma also talked about how to utilize the existing platforms to increase exports to China and it will be discussed in details later with Coordinating Minister for the Economy, Minister of Industry, and himself.

The Minister mentioned that this year, 27 people have an opportunity to study in Jack Mas campus so they could learn the management of start-up that is environmentally friendly.