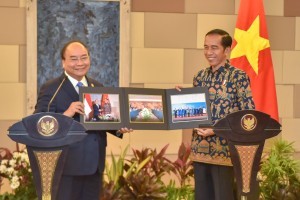 President Joko Jokowi Widodo met with the  Prime Minister of Vietnam Nguyen Xuan Phuc in  Uluwatu 7 Room of Bali Nusa Dua Convention Center, Bali, Friday (12/10). The meeting then followed by a bilateral meeting between the Indonesian  and Vietnamese delegates.

One month ago, both leaders had also met in Hanoi, Vietnam. This shows the high intensity of bilateral relations based on strategic partnerships between Indonesia and Vietnam, President Jokowi said at a joint press conference with Prime Minister Nguyen Xuan Phuc after  the bilateral meeting.

There were five things delivered by President Jokowi at the joint press conference. First, the President thanked the Vietnamese Prime Minister for his attention to Indonesian investors in Vietnam.

Second, the President appreciated the cooperation in overcoming the barriers of  Indonesias export of automotive products to Vietnam.

Third, President Jokowi expressed the enthusiasm of Indonesian businessmen to explore new market opportunities in Vietnam, such as pharmaceutical products and medical devices.

Fourth, two days after the meeting in Hanoi, the Exclusive Economic Zone negotiation team had held a meeting to find a mutually beneficial solution. We agreed to continue to encourage the negotiating team to intensify and complete the negotiations immediately, the President said.

Fifth, President Jokowi encourages to immediately implement the IUU (Illegal, Unreported and Unregulated) Fishing cooperation that was signed in Hanoi.

The last , President Jokowi and Vietnamese Prime Minister Nguyen Xuan Phuc agreed to continue to contribute to the development of the Indo-Pacific cooperation concept which prioritized ASEAN’s centralization.

President Jokowi also expressed his gratitude for the prayers, sympathies, as well as the assistance provided by Vietnam for the victims of the earthquake and tsunami that hit Palu and Donggala. (Tim Liputan IMF-World Bank Group) (GWH/MMB/Naster)