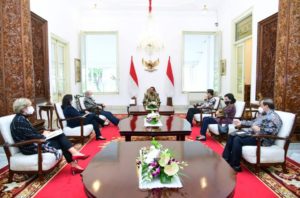 Minister of Finance Sri Mulyani stated that the World Bank gave its support to Indonesia’s G20 agendas, adding that Indonesia’s leadership that is supported by the international world plays a vital role in recovering the global post-pandemic economy.

“Many countries are still left behind and we certainly need to pay attention to it so that Indonesia’s theme ‘Recover Together, Recover Stronger,’ can be accomplished. Indonesia’s leadership with the support of G20 and international organizations can pay attention to countries that are still unable to recover. The lack of access to vaccines, domestic economic challenges in low-income countries are extraordinary challenges. Therefore, it is one of the discussions of G20. The world bank will support and certainly Indonesia’s leadership is important,” Sri Mulyani said.

According to Sri Mulyani, how Indonesia can set an example to implement energy transition, commit to implement the Paris Agreement, and reduce carbon footprint in accordance with Indonesia’s nationally determined contribution (NDC) was also discussed in the meeting.

“In this case, the discussion was very concrete because Indonesia already has a mechanism to formulate carbon price, carbon market, carbon tax, and Indonesia has also built quite a lot of renewable energy [system]. It will be brought to international forums so that we can gain great international support, both in terms of funding and policy framework,” she said.

“The President underscored that Indonesia’s commitment is very solid and Indonesia not only wants to talk but also walks the talk. However, to be able to do it, financing is essential,” she said, adding that they also discussed global food security and the President expressed his concern on the upward trend of global food prices that can threated global economic recovery.

“The President really wants global economic recovery to not be disrupted because price increase, especially food price increase, will badly burden the people. Therefore, there needs to be a global agreement on that matter,” she said.

In terms of the environment, Sri Mulyani went on to say that the World Bank also provides support for mangrove replanting program in Indonesia, adding that the program can become an example from Indonesia to mitigate the impacts of climate change.

“Also, in terms of ability to protect forests, we have not had [forest] fire for three years. It is certainly very different from the situation in various countries that are facing forest fire,” she said.

In addition, regional issues including the situation in Myanmar and humanitarian issue in Afghanistan were also discussed in the meeting, Sri Mulyani stated, adding that President Jokowi has a great concern on the issues in the two countries.

“Humanitarian issues [faced by] residents in the two countries also become the focus of the whole world,” she remarked. (BPMI of Presidential Secretariat/UN) (DH/LW)