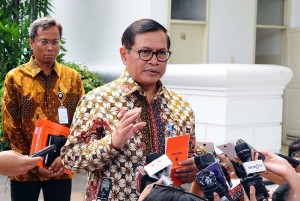 Then, this  year is no longer Tahun Ayo Kerja (Lets Work Year) as were going to focus on speeding up the works because the President wants economic growth in 2016 be better than that in 2015, Cabinet Secretary Pramono Anung said to the reporters after a Plenary Cabinet Meeting at the State Palace, Jakarta, on Monday (4/1) afternoon.

Pramono added that on next Wednesday (6/1), the President probably will symbolically be present in one ministry to tell that all programs no longer start in April, March or June, but will start at the beginning of the year.

Pramono also said during the Plenary Cabinet Meeting, President Jokowi asked 17 ministries which have programs to boost export to not implement them separately and at small scale, as it will not run smoothly. Rather, the President told the ministries to integrate the programs under National Export Promotion Agency.

Therefore, the programs should not be scattered in 17 ministries but in one agency only that is responsible for the whole series of boosting trade, industry, tourism, and others, Pramono said.

Another point which becomes Presidents concern is to finish asset revaluation and tax amnesty this year because it is a fundamental aspect and a foundation to improve the economy in 2016-2017.

Pramono further said that the President also reminded that this year is the year of competition, especially because the ASEAN Economic Community (MEA) will begin this year and Indonesia does not have many choices rather than be ready and must be ready.

Pramono went on to say that according to Presidents instruction in Bogor, nomenclature in every institution must be changed. He said that the President and Vice President now use a more simple term, namely Susinisation term which refers to Susi Pudjiastuti, Minister of Maritime Affairs and Fisheries. They also asked other ministries/institutions to apply simplification to make the works efficient.

For example, Ministry of Education and Culture under Anies leadership, Pramono added, has done the simplification and saved around Rp2.7 trillion and the same measure will be applied in other ministries and institutions too.

For the record, Ministry of Maritime Affairs and Fisheries has saved around Rp 2 trillion.

There are some ministries which have not applied it yet and they must speed it up. That is what the President means by the year of working fast, Pramono concluded. (SLN/ JAY/ ES) (RAS/EP/YM/Naster)