President Jokowi: Ministries Must Coordinate to Bring Development to Papua in 2016 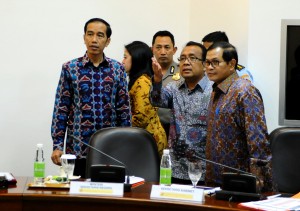 President Jokowi accompanied by Minister of State Secretary Pratikno and Cabinet Secretary Pramono Anung before a limited meeting on Papua, at the Presidential Office, Jakarta, on Thursday (3/12) afternoon

President Joko Jokowi Widodo asserted his wish to the Government to pay more attention to Papua. The Government and the country must present in the infrastructures development, including roads, bridges, seaports, industrial areas and markets. Their presence in health, education, and social services are also expected by the people in Papua, President Jokowi said when delivering a remarks in a limited meeting on Papua, at the Presidential Office, Jakarta, on Thursday (3/12) afternoon.

The President believes in the past few years, the ministries worked based on their sectors and they are unintegrated, so they seem to work separately. Therefore, in the limited meeting, the President asserted the Government to pay attention and to accelerate road construction, particularly at the borderline, as well as the bridges.

President Jokowi called us (the Government officials) to open the boundaries in several areas in Papua, for example by starting the construction of the road connecting Agas and Wamena that would be carried out by the Ministry of Public Works and Public Housing and Indonesian National Defense Forces.

I think that kind of road is highly needed in those areas, so that the flow of goods and peoples transportation from one regency to other regency could be speeded up. Thus, it will affect the price of goods in that areas too, President Jokowi said.

According to the President, the Government wants to lay a solid foundation to the acceleration of development in Papua. Thus, it is really needed to be supported by a good governance in the region, along with its accountable apparatus who provide spaces for the people to participate in the process.

We hope that through this actions, we could hear the voices of the Papuans. We called on everyone to develop Papua, President Jokowi firmly said.

We hope in the upcoming years, the people of Papua could sense the presence of the Government through the goods and services which are available in the areas, President Jokowi said.