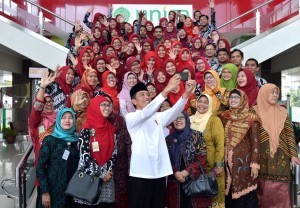 President Joko Jokowi Widodo on Thursday (6/12) visited Aisyiyah University of Yogyakarta (Unisa) at Mlangi Village, Sleman Regency and has a silaturahmi (amicable gathering) with central board of leaders of Unisa.

After the visit, President Jokowi told the reporters that his visit aimed at monitoring human resources development.

We want to see things related to the development of human resources as well as our strengths and potentials. This is part of our future major plan, he added.

The President asserted that educational and health institutions which are affiliated with Muhammadiyah have their own excellences and are projected to play a vital role in the Governments human resources development program in 2019.