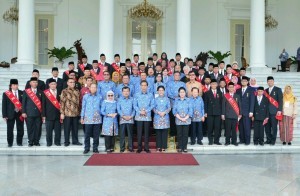 President Jokowi is in a group photo after the bestowal event of Satya Lencana Honorary Medals for Social Service on Sunday (17/12), at the Bogor Presidential Palace, West Java

President Joko Jokowi Widodo expressed his appreciation to blood donors who voluntarily donate their blood for more than 100 times in a bestowal event of Satya Lencana Honorary Medals for Social Services on Sunday (17/12), at Bogor Presidential Palace, West Java.

Ladies and Gentlemen, you deserve to be acknowledged as humanitarian activists for donating blood for more than 100 times. Someone must do it continuously for at least 25 years, President Jokowi said.

The President hopes that the award can motivate other people to be consistent in donating blood to save other lives.

President Jokowi further said that the availability of blood and humanitarian aids is very important for those who suffer from natural disaster as Indonesia is geographically located in the Ring of Fire prone to natural disaster.

We must be ready to face any possibilities and to save lives as many as possible when disasters strike, the President firmly said.

Also on that occasion, President Jokowi thanked the Indonesian Red Cross (PMI) for always being present in every region that needs help, both during disaster period and when people need blood donation to save their lives. The President also asked the Red Cross to promote humanitarian values and carry on blood donation programs throughout the country so it can be an integral part of every Indonesians lives.

Remember, a drop of blood can save a life, the President said.

Also attending the event were Vice President Jusuf Kalla who is also the Chairman of the Indonesian Red Cross (PMI), along with his spouse Ibu Mufidah Jusuf Kalla, Minister of Health Nila Moeloek, Daily Executive Chairman of PMI Ginandjar Kartasasmita, and the managers. (BPMI/EN) (RAS/EP/YM/Naster)