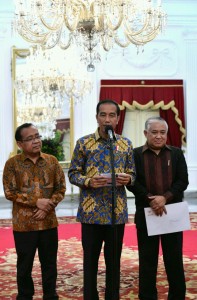 President Jokowi in a press conference with Din Syamsuddin and Minister of State Secretary at the Merdeka Palace, Jakarta, Monday (23/10). (Photo by: Bureau of Press and Media)

Today, I have appointed Prof Din Syamsuddin as Special Presidential Envoy for Interfaith Dialog and Civilization Affairs, the President said in a press conference at the Merdeka Palace, Jakarta, Monday (23/10).

On that occasion, President Jokowi also handed in the Presidential Decree on the appointment.

According to the President, Din did not immediately accept the appointment but after two weeks, he accepted it.

Although he was initially hesitant, I told him that this is for the interests of the state and the nation, the President said. After the appointment, President Jokowi assigns Din Syamsuddin to promote interfaith dialog and cooperation, both at home and abroad.

He is expected to promote interfaith dialog and cooperation and among civilizations by promoting Indonesian civilizations and cultures based on Pancasila, the President said.

Commenting on his appointment, Din Syamsuddin said: “I think this job is a fight that is in line with the constitution. I will carry it out as a service to the nation and state to support our government.”

Din also hopes that in performing his duties, he could receive supports from the Indonesians people and the people and him can together perform this duty. He also said that President Jokowi told him to first create interfaith and inter-group harmonious relations in the country as a model for spreading across the world.

We should be able to spread Islam, which is craved by the world. Islam of Indonesia, which is based on wasatiyyah (moderation); and the Islam that brings blessings to the world that has long been awaited for, Din said.

Nevertheless, Din said that he had already carried out what he would do as the president of Asian Conference of Religions for Peace and as co-president of World Conference on Religion for Peace (WCRP).  However, with the appointment he said the position would be stronger due to the legality and formality to act on behalf of the state. (*/ES)(EP/YM/Naster)