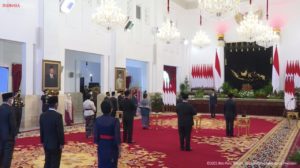 President Jokowi at the ceremony to award the title of National Hero and medals of honor, Wednesday (10/11). (Source: Screenshot of Presidential Secretariat’s YouTube)

President Joko “Jokowi” Wednesday (10/11) named four historical figures as national heroes during the commemoration of the 2021 Heroes Day at the State Palace in Jakarta.

The four figures were given the award posthumously for their service in the struggle to achieve, regain, and maintain independence as well as maintain national unity and integrity.

Based on Decree of President of the Republic of Indonesia Number 109/TK/2021 promulgated on 25 October 2021, the President stipulated the following names as national heroes:

The ceremony was attended by the heirs of the heroes and held with strict health protocols.

On that occasion, President Jokowi and Vice President Ma’ruf Amin as well as other limited guests congratulated the heirs of the national hero title awardees.

Previously, Coordinating Minister for Political, Legal, and Security Affairs Mahfud M. D. said that the title of the national hero this year was awarded by prioritizing not only character but also regional equality.

“As there are hundreds of nominees and they are all excellent, this time, the Government prioritizes, besides character, regional equality. It is more prioritized. Until now, Central Sulawesi province has not had a national hero. And East Kalimantan province has not had a national hero either,” he said as Head of the Board of Title, Mark of Service, and Mark of Honor in his press statement aired on the YouTube channel of Coordinating Ministry for Political, Legal, and Security Affairs, Thursday (28/10).