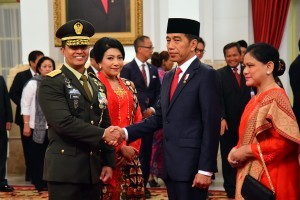 According to the President, before serving as Pangkostrad, Andika also previously served as Presidential Security Detail (Paspampres) Commander, took office at the Indonesian Army’s Special Forces (Kopassus), led the Military Education and Training Command in Bandung (Kodiklat), and in the Regional Military Commander.

The President acknowledged there were four other Army Chief of Staff candidates to replace General Moelyono. However, Andika is considered to have a complete track record. There are indeed several other candidates; still I decided to choose him, he said.

President Jokowi did not question Andika’s young age and the length of his career in the Pangkostrad before being appointed as Army Chief of Staff.

Everything has been calculated, especially related to experience, track record, education, and what has been done. We assess everything we can see, the President said.

According to President Jokowi, there will be no special assignment for Andika as Army Chief of Staff. He (Andika) certainly knows what to do for the sake of the country, he concluded. (MAY/AGG/ES)