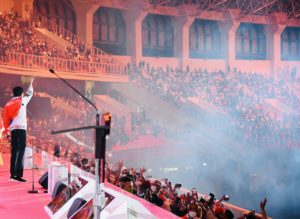 This year’s National Games (PON) held in Papua reflect the development progress in the region as well as the readiness of its infrastructure and the people to organize the prestigious event, according to President Joko “Jokowi” Widodo.

“We are proud to be in Papua and to be in the best stadium in the Asia Pacific region,” the President said at the opening ceremony of the 20th National Games on Saturday (02/10) at Lukas Enembe Stadium in Jayapura Regency, Papua.

According to the President, the Government continues to build infrastructure to improve regional connectivity in land, sea, and air in Papua, and continues to develop Papua’s human resources.

“Airports, ports, trans Papua roads, as well as Papuan human resource development are other achievements of Papua,” he said.

The National Games, he added, has a special meaning for all Indonesian people as they are a medium for unity, togetherness, brotherhood, equality, and justice to prosper together within the Unitary State of the Republic of Indonesia.

“Let us celebrate this National Games with joy. Let us uphold sportsmanship, strengthen our brotherhood, togetherness, equality, and national unity and integrity. Let us play our role to ensure the success of the 20th National Games,” the President said.

On that occasion, President Jokowi also explained steps taken by the Government to develop high quality talents in Papua.

“The Government continues to improve the quality and quantity of formal educational institutions. This morning, I inaugurated the start of the Papua Youth Creative Hub construction to produce successful entrepreneurs who can increase the added value to Papua’s potential,” he said, adding that the achievements of Papuan youth must continue to be nurtured and developed.