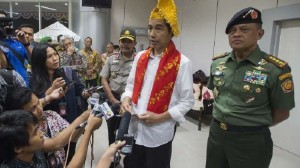 President Joko Widodo accompanied by the Indonesian National Defence Forces Commander and the National Police Chief when responding to the reporters, on Friday (18/9), in Palu, Central Sulawesi.

At that time, I said that Indonesia is ready to give full support to solve the hostage problem. Alhamdulillah four hours after the phone call, at 8 pm, I was informed that the two hostages can be released and the problem was solved. However, at that time, the hostages were still in the middle of the forest so we could not deliver the news yet, President Joko Widodo said.

According to the President, now the two Indonesian citizens are already in the Consulate Office of Indonesia in Vanimo.

“We hope security in Papua could be maintained, the President said firmly.

That was the thing I told Foreign Affairs Minister on this afternoon (Friday, 18/9). Yes, Minister Retno has not provided the information yet. I already ordered them to find out who is responsible Ari said while quoting the President.

President Joko Jokowi Widodo praised all parties who have succeeded in releasing two Indonesian citizens held hostage in Papua New Guinea.  The President also asserted that there is no money reward in the releasing process.

I am glad and proud. They work silently, talk less, but they prepare. Until the last minute, yesterday, I only ordered them to wait for a command from the highest commander, President Jokowi said to the reporters after landing at Mutiara SIS Al-Jufrie Airport in Palu, Central Sulawesi, on Friday (18/9) evening.

In the meantime, a member of the presidential communications team, Ari Dwipayana, reiterated the statement of the President to the reporters when two Indonesian citizens (WNI), Ladiri and Badar were held hostage, the President immediately ordered the Coordinating Minister for Political, Legal and Security Affairs to coordinate with the Minister of Foreign Affairs, TNI (Indonesian National Defense Forces) Commander, the Indonesian National Police Chief, and the National Intelligence Agency (BIN) Chief to work together.

President Joko Widodo also expressed his gratitude to the role of Papua New Guinea Government which helped the releasing process of those hostages.