President Jokowi : No More Permits that Take Years to Finish 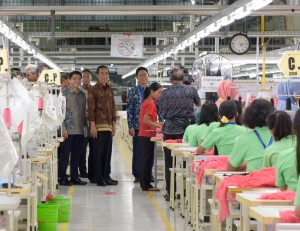 President Jokowi and his entourage visit a local factory (22/1)

In order to improve Indonesias competitiveness, the Government, beside increasing infrastructure development and peoples work ethic, will also conduct a major improvement on permit.

There should be no more permits that take years to finish. There should be no more permits that take months to finish. I have already told all ministries. When I finish at ministerial level, I will go to regional level. All of them must be in line. We will do that, if once again, we want to win the competition, President Joko Jokowi Widodo said when delivering a remarks on the Launching of Third Stage of Investment Program to Create Job Opportunities, in Ketonggo Hamlet, Kerjo Lor Village, Ngadirejo Sub District, Wonogiri Regency, Central Java, on Friday (22/1) afternoon.

The President took an example when it needs years to finish permits in the Investment Coordinating Board (BKPM). Years! If it goes well, it only takes 6, 7, or eight months to finish. I do not want to know, the permits must be completed in hours! Alhamdulillah, it only takes 3 hours to finish 8 permits. If you do not believe it, you should try it. If it takes more than 3 hours, report it to me. I ensure, I will replace the Head of Investment Coordinating Board (BKPM), President Jokowi said while mentioning that he has already checked it via other businessmen.

And I believe, if the businessmen come to apply for permit, they will be served only in a few hours, President Jokowi said.

President Jokowi also said that he has already asked the Governor of Jakarta Basuki Tjahaja Purnama Ahok about Building Construction Permit (IMB)  which used to take years to finish, but now there is an online system. Online permit for Legal Trade Permit (SIUP) applicable system is also available. The time is not an issue anymore.

President Jokowi asserted that he gives 2 weeks for the regulations that need to be cut, simplified or abolished.

The President considered the huge amount of regulations will trouble business sector, ourselves, and the Government as well. We become incompetent in global competition. Yet, the President added, the world changes in seconds.

We can not work in regulations we made. Moreover, there are 1,000 Regional Regulations that piled up in the Ministry of Home Affairs. Do not need to evaluate it, just cut it. If we study and evaluate it every day, we could only finish 10 or 15 regulations a year. It takes too much time. Regulations that make our works complicated shall be abolished immediately, there is no need to study it, President Jokowi firmly said while asserting that the order is simple, to abolish it.