President Jokowi: No One Should Think of Themselves as Most Self-righteous, Most Religious, Most Pancasila-minded 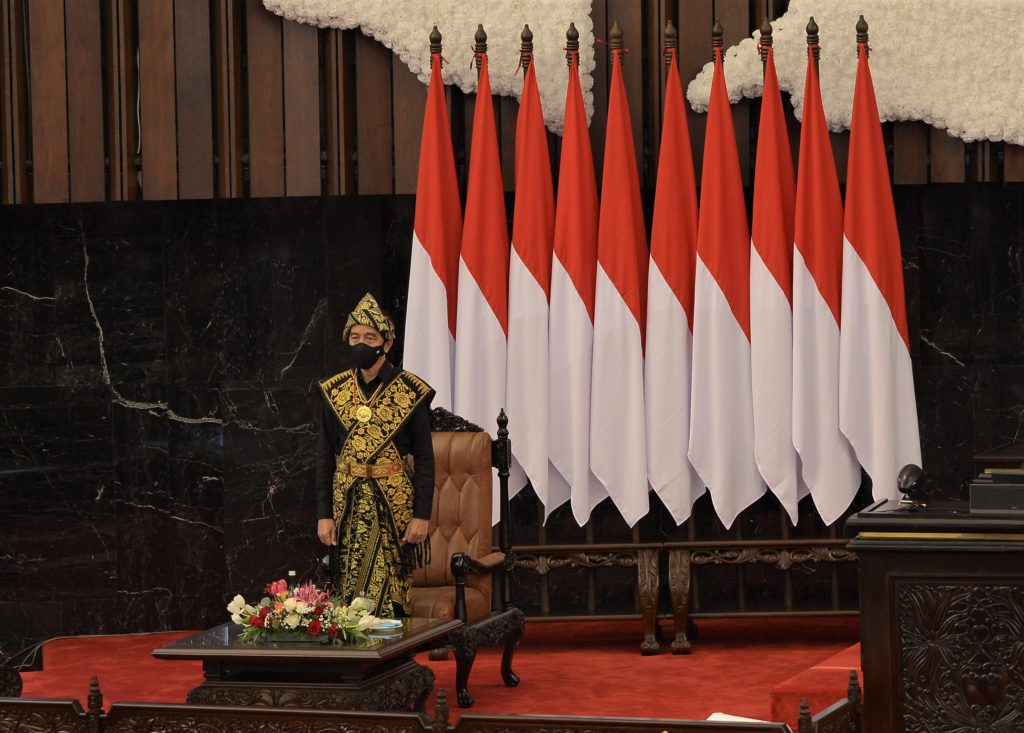 In his state of the nation address to commemorate the Proclamation of Independence of the Republic of Indonesia, President Joko “Jokowi” Widodo said no one should be most self-righteous while blaming others, most religious, and most Pancasila-minded.

“All those feeling self-righteous and obtruding are not morally correct. We are fortunate that the majority of Indonesian people, from Sabang to Merauke, from Miangas to the Island of Rote uphold solidarity and unity, are tolerant and care for each other, so we can get through these trying times. ” the President stated at the Annual Session of the People’s Consultative Assembly (MPR RI) and the Joint Session of the House of Representatives (DPR RI) and the Regional Representatives Council (DPD RI) on the Occasion of the 75th Anniversary of the Proclamation of Independence of the Republic of Indonesia, at the MPR/DPR/DPD RI Building, Senayan, Jakarta, Friday (14/8).

All policies, he said, must be prioritized to become environmentally friendly and promote protection of human rights. In addition, speed and accuracy cannot be exchanged with carelessness and arbitrariness.

“The Government always makes efforts to seriously eradicate corruption. Prevention efforts must be intensified, through simple, transparent, and efficient governance. And law must be enforced without discrimination. Upholding democratic values also cannot be compromised,” the President stated.

According to the President, democracy must continue to be practiced without disrupting speed of works and legal certainty, as well as the noble values of the nation. The 2020 regional elections, he said, must be conducted with discipline by following health protocols.

“The noble values of Pancasila, the Unitary State of the Republic of Indonesia, national unity, cannot be exchanged with anything. We will not provide any room for anyone to pose a threat to them,” the President said.

National education system, the President went on to say, must prioritize religious values, as well as develop strong and noble human characters, and excel in innovation and technology.

“I want all technology platforms to boost the transformation to national advancement. The significant role our digital media must be directed to build humanity values and national characters,” he said.

The media, President Jokowi said, should not be controlled to amass clicks and likes, but must instead be pushed to contribute to humanity and national interests.

Indonesia’s advancement, the President stated, must be firmly rooted in the Pancasila ideology and the nation’s culture.

“Those great purposes may only be achieved through cooperation among elements of the nation, through mutual cooperation, lending helping hands and reminding each other in goodness and virtue. Indeed, democracy guarantees freedom, but it is only for freedom that respects other people’s rights,” he said.

On the occasion, the President expressed hope that the Indonesian people are fortunate and thankful for the support and speedy work of the Chairpersons and Members of state institutions, who have taken extraordinary measures in supporting crisis handling and turning it into an opportunity to implement the nation’s great strategies.

The other running legislative agenda, the President said, are as follows: Deliberation of Bill on Minerals and Coal Mining, Bill on State Finance Policy and Financial System Stability for Handling COVID-19 Pandemic.