President Jokowi: No Room for Ideology Other Than Pancasila 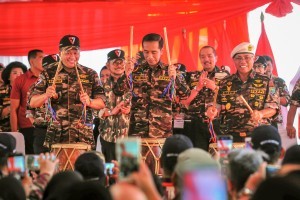 President Joko Jokowi Widodo affirmed that Indonesia continues to unite and move forward for 73 years because Indonesia has Pancasila ideology in the frame of the Unitary State of the Republic of Indonesia and Unity in Diversity – Bhinneka Tunggal Ika.

We must never give room for other ideologies to replace Pancasila, even the the smallest room, the President said when giving a speech at the Opening of the FKPPI State Defense National Jamboree, at Ragunan Campground, Jakarta, Friday (7/12).

The President went on to say that do not let foreign ideologies try to replace Pancasila, which will eventually tear the Unitary State of the Republic of Indonesia, the Red and White flag, and betray the aspiration of Indonesian independence.

He reminded all that the task of defending the country would not be easy, and in this age it is not enough to defend the country only by delivering speeches and gathering masses. However, defending the country must be actualized in various real works and professions, for example, by becoming a doctor who has the dedication to provide health services to the people, particularly those in remote areas or an engineer who get involved in the nations great work in infrastructure development in Indonesia.

In addition, according to the President, defending the country can also be conducted by becoming an entrepreneur, a sociopreneur, to create a new model in business that also helps address social problems faced by our society.

Defending the state can also be conducted by becoming the best individuals with character, who are optimistic, not pessimistic, and contribute to the progress of the nation, the state, and the Indonesian people, the President concluded.