President Jokowi: Norway is an Important Partner of Indonesia in the Field of Environment, Human Rights, and Energy 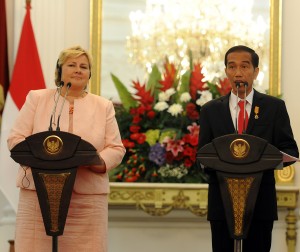 President Jokowi and Prime Minister of Norway Erna Solberg in a joint press statement, at the State Palace, Jakarta, Tuesday (14/4)

President Joko Widodo (Jokowi) admitted have just completed a very productive meeting and friendly with the Prime Minister (PM) Norway Erna Solberg, who had the first time to visit Indonesia.

Recognized by the Head of State, Indonesia and Norway has a very different character when viewed from the geographical location, size of population and economic capacity. However, the Head of State assess, the two countries also have many similarities in upholding universal values, such as democracy and respect for human rights

President emphasized, for Indonesia, Norway is an important partner in the field of environment, human rights cooperation, energy, fisheries, and maritime.

Therefore, President Jokowi continued, in a bilateral meeting with the Prime Minister Solberg, has been discussed the efforts to strengthen the bilateral cooperation, among others:

a. In the field of environment and forestry, the two countries have agreed to continue cooperation REDD + that the implementation has been started since 2010.

“Norway appreciates Indonesia’s commitment to decrease greenhouse gas emissions by 26 percent – 41 percent in 2020, as well as some other affirmative policies,” President Jokowi said.

b. In the field of fisheries, Norway could be an important partner of Indonesia, including efforts to combat illegal fishing (IUU fishing) and marine fish farming.

d. In the field of triangular cooperation, Indonesia-Norway have cooperated to train 25 police women and 12 teachers from Afghanistan, in Jakarta and Bandung.

e. In education, to encourage the implementation of joint inter-university-degree the two countries, several universities in Indonesia, such as UGM, ITB, and Ibn Sina Academy of Nursing has established cooperation with universities in Norway.

President Jokowi said, recorded between 60-80 Indonesian students studying in Norway, and most are graduate students.

Besides bilateral issues, President Jokowi said he and Prime Minister Solberg also exchanged views on regional and global issues, including ASEAN, climate change, the Middle East situation and others.

“Both countries have also agreed to mutual support for candidacy as non-permanent members of the UN Security Council, to Indonesia in 2019-2020 and for Norway in 2021-2022,”  President Jokowi said.

In the end of his statement, President Jokowi, expressed appreciation to the Prime Minister Solberg for visiting. “I am confident that the bilateral relations between Indonesia and Norway will be more powerful and useful to the people of both countries,” he concluded.

While the Prime Minister of Norway Erna Solberg said, in addition to bilateral issues, it is also important to discuss international issues, in which Indonesia and Norway should be more frequent in the future cooperation.

“Due to the present world situation requires that we all (countries in the world) work together to resolve the conflicts who occur in the world,” Erna Solberg said. (*/Humas Setkab/ES)