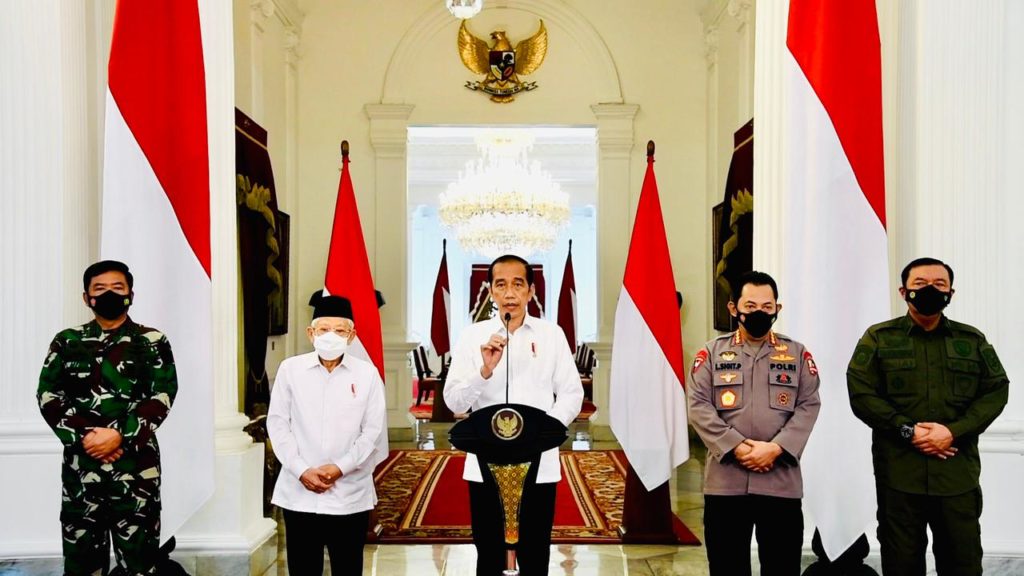 President Joko “Jokowi” Widodo has announced he will posthumously award promotion and a Jalasena medal, a medal of honor for the Indonesian Navy, to the fallen crew members of the KRI Nanggala-402 submarine, as well as promotion for the Chief of Papua Intelligence Agency (Kabinda Papua) Brigadier General I Gusti Putu Danny Nugraha Karya who died in the line of duty.

“The state will posthumously award promotion from their current rank to the next higher rank and a Jalasena medal of honor for their, our best soldiers’ dedication, service, and sacrifice,” the President told the press at Merdeka Palace in Special Capital Region of Jakarta, Monday (26/04).

The Government, the President added, will also guarantee the education of the KRI Nanggala-402 members’ children up until Bachelor’s degree.

The Head of State also expressed his appreciation and respect to the parties involved in the search for KRI-Nanggala-402 submarine that has been missing since last Wednesday (21/04).

“I would like to also express my highest appreciation and respect to the Indonesian National Defense Forces (TNI), Indonesian National Police (Polri), the National Search and Rescue Agency, the Maritime Security Agency, the Agency for the Assessment and Application of Technology, and the National Transportation Safety Committee, as well as all other parties that I cannot name one by one that have made their best effort to find the KRI Nanggala-402,” he remarked.

Appreciation was also given to the heads of friendly countries, including Singapore, Malaysia, and Australia that took part in the search effort for the submarine.

The President also expressed deep condolences for the passing of 53 Indonesian Navy members aboard the KRI Nanggala-402 submarine during the course of their duty in the northern waters of Bali island.

“They are the nation’s best men, the best patriots who safeguarded national sovereignty. Their service will be engraved in the heart of all Indonesian people. May the soldiers of the Hiu Kencana Corps have the best place by the side of One Almighty God and may the families they left behind be given acceptance, patience, and fortitude,” he said.

On that occasion, President Jokowi also ordered Commander of the TNI and Chief of the National Police to arrest all members of the armed criminal separatist group KKB in Papua.

The President gave the order after receiving report from Commander of the TNI and Chief of the Polri on the death of Kabinda Papua Brigadier General I Gusti Putu Danny Nugraha Karya during an armed conflict against the KKB in Dambet village, Beoga district, Puncak regency, Papua province on Sunday (25/04).

“I have also ordered Commander of the TNI and Chief of the National Police to continue to pursue and arrest all members of the KKB. Let me underscore that there is no place for armed criminal groups in the land of Papua or anywhere in Indonesia,” he stated.

The President also said will also award the late Brigadier General I Gusti Putu Danny a posthumous promotion to the next higher rank for his dedication, service, and sacrifice.

“On behalf of the people, the nation, and the state, I’d like to offer my sincere condolences to the family and people he left behind. Let us all pray for the late Brigadier General I Gusti Putu Danny. May he have the best place by the side of One Almighty God,” he remarked. (DND/AIT/TAR) (DH/EP)