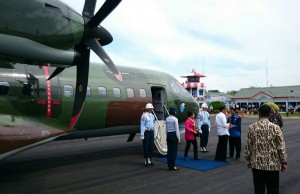 Establishment of BAKAMLA signifies a new era of synergic maritime security operation which is supported by Early Warning system and Integrated Law Enforcement unit, says Andi through a phone message.

In order to enhance coordination between government institution on maritime safety, a Task Force Of Planning, Security Development and Law Enforcement On Sea is established in 2003 through a Ministerial Decree of Coordinating Minister of Politics and Security, number Kep.05/Menko/Polkam/2/2003.

Furthermore, through a series of seminars and cross-sector coordination, on December 29th of 2005, a Presidential Regulation number 81 of 2005 is set to be the legal basis for BAKORKAMLA. Now with the issuance of PERPRES number 178 of 2014, BAKORKAMLA has changed its name become BAKAMLA with bigger authority in securing sea throughout this country.(WID/ES)(Ifp)