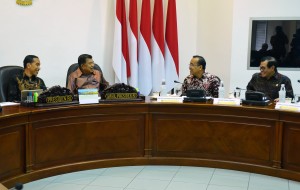 The Government will carefully scrutinize the draft of Oil and Gas law proposed by the House of Representatives (DPR) and ensure that the law does not violate the Constitution, according to President Joko Jokowi Widodo.

The President made the statement during a limited cabinet meeting on the draft of Oil and Gas law at Presidential Office, Jakarta, Wednesday (23/1).

Oil and gas, according to the President, are strategic resources for national development and are not renewable. Therefore, he added, the law is expected to strengthen national energy resilience and security.

“The law should increase oil and gas production, strengthen national capacity and domestic industry, as well as improve our human resources in oil and gas industry,” the President said, adding that the law should also encourage reforms in oil and gas management to make it more efficient, more accountable, less complicated, more sustainable, and more valuable for national economy.