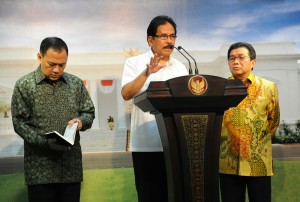 In an effort to develop potentials of sharia finance in Indonesia, President Joko Jokowi Widodo (Jokowi) has given a green light to the idea to establish National Committee of Sharia Finance, which will be directly led by the President with the members comprising several ministers, Governor of Bank Indonesia and Chairman of the Financial Service Authority (OJK). A professional executive director will also be appointed with the task of developing sharia financial sectors.

The President has instructed Cabinet Secretary to immediately prepare the Presidential Regulation. The Chairman or the Head of Board of Directors is the President himself. The members include Governor of Bank Indonesia, Chairman of the Board of Commissioner OJK, Minister of Finance, Coordinating Minister for the Economy, Minister of Religious Affairs, Minister of State-owned Enterprises. We will also invite Chairman of the Indonesian Ulema Council (MUI) as members of the Board of Directors. Minister of National Development Planning/Head of National Development Planning Agency will be in charge as the Secretary. The Executive Director will be from the professional, Sofyan said to reporters after a limited cabinet meeting at Presidential Office, Jakarta on Tuesday afternoon (5/1).

According to Sofyan, the Committee is tasked to harmonize rules and regulations of the regulation standard of sharia finance. He added that OJK is in charge of managing conventional banks, but wakaf (endowments), zakat, and innovation of products, for example, will be handled by this Committee.

This is an inclusive financial committee. Many people still consider that if sharia financial service is promoted, it will be more inclusive, Sofyan said.

Sofyan further said that the Committee is also tasked to make religious more productive and professional, in addition to be in charge of advocate, promotion and external relations matters.

It will be done later on. However, technical tasks will be done by each side responsible in its field, he said.

Sofyan further said that the development of sharia financial sector is smaller than the available potentials that are now developing.