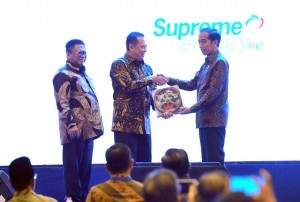 President Joko Jokowi Widodo launched the One Map Policy Geoportal and the National Infrastructure Progress Book, at the Bidakara Hotel, Jakarta, Tuesday (11/12). In his remarks, the President said that the more he went to the field, the more he knew and realized that in Indonesia there was too much overlapping  land-use. For example, in Kalimantan alone, 19.3 percent or 10.4 million hectares of the islands 53.98 million ha of land were subject to overlapping land-use, even the issues also occured in the boundaries of the village or district.

In addition to address overlapping land-use, according to the President, the One Map Policy will make development planning more accurate, not only based on data but also based on detailed maps.

Building irrigation for example, we will know where the dam is located, the irrigation must be. Likewise, the ownership of concessions will be seen, said the President, adding that the rationale why the One Map Policy have not been realized for years is because there are too many interests and fears, and concerns.

For me, Im not worried at all. I have ordered this for the past two years. All the names will appear later, but only me can open it, said the President, while adding that in the future, with the existence of this digital map, there is no need to have a location permit.

The President stressed that the Government has committed to implementing this One Map Policy. He claimed to feel embarrassed, if in the big data era like now, there is no One Map Policy in Indonesia.

Under the One Map Policy, President Jokowi wants there will be one standard, a point of reference. Unlike today, one ministry has its own map.

One reference, one database, and one geoportal, so that, there is no overlap, so that there is certainty, clarity, and we are consistent in building this country, said the President.