President Jokowi: Only BPS is Responsible for Data 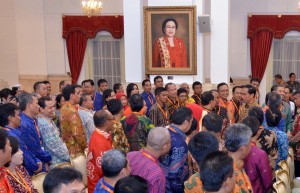 President Jokowi and participants of the Technical Coordination Meeting on the 2016 Economic Survey, on Tuesday (26/4), at the State Palace, Jakarta

President Joko Jokowi Widodo said that one of the keys to win global competition is by having strategic, accurate, and good quality data and information.

Thus, the Government can rely on data and information when making and formulating policy as well as making decision, be it in office or on the ground.

However, in fact, the President added, since the beginning of his administration, he has been receiving different data and information, including for example, data on poverty from Minister of Health, Minister of Social Affairs, and the National Statistics Agency (BPS).

I do not want it to happen again. From now on, only the BPS is responsible for data and the BPS must take its job seriously, President Jokowi said in his directives at the declaration of the 2016 Economic Census and the inauguration of the Technical Coordination Meeting on the 2016 Economic Survey, on Tuesday (26/4) at the State Palace, Jakarta.

The President took an example on the data of national rice production which is varied from one institution to another.

The President admitted that this made him confused due to the questionable data among Ministry of Agriculture, Ministry of Trade, and the BPS and it is also different on the ground.

We must end this situation. You should inform the data as it is. If we must import products then we will, or otherwise. We must be firm, the President stated.

Therefore, the President asserted that the role of the BPS is crucial and strategic because accurate and detailed data from the BPS will lead to effective and right policies as well as policies that are right on target.

The President also called on big, medium, small and micro entrepreneurs to provide right data and asserted that the Economic Census from the BPS has nothing to do with taxation, so they do not have to be afraid.

Thus, if the turnover approaching 1,000, tell the right amount. If the turnover is 2,000, tell the same amount. Do not cut it by saying the turnover is 1,000 while in fact it is 2,000. Give us the right data because it is really important for us to know our competence, productivity, and the condition of small and micro industries, in order to define the policy that we must implement, the President said while reminding all not to give incorrect and wrong portrait that will cause the Government to make and formulate a wrong policy.

To the BPS officials, President Jokowi reminded that it is not easy to carry out the task in the 2016 Economic Census. Moreover, online-based businesses are now spreading rapidly.

Be focus on the results that we want to achieve, namely accurate portrait on the economic condition and potential in the villages, districts, cities, regencies, as well as the portrait of micro, small, medium, big enterprises, and large firms. We must have these portraits, the President asked.

President Jokowi also conveyed his best wishes to the officials of the BPS and as many as 340,000 field officers who takes part in the 2016 Economic Survey to work well.

It is quite a large number but it is worthwhile to provide us a detailed and accurate data which will be used to formulate policies, be it short, medium, or long-term policies, the President said.

For the record, the 2016 Economic Survey involves 340,000 field officers in 81,789 villages and sub-districts.  The President instructed all related ministries and institutions to give full support to the survey, which is to be held on 1-31 May 2016.