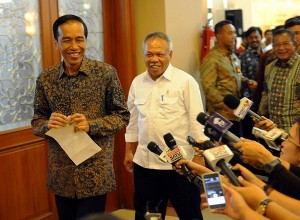 President Jokowi after answering reporters questions during the signing of activities contract at the Ministry of Public Works and Public Housing, Jakarta (6/1)

Answering reporters questions regarding the assessment of the ministers, President Joko Jokowi Widodo said that the only one who can assess the ministers performance is the President.

It is a principle that the only one who can assess ministers performance is the President, the President firmly said after attending the signing of activities contract at the Pendopo Room of the Ministry of Public Works and Public Housing, Jakarta.

Asked about the reshuffle, President Jokowi said that reshuffle is the prerogative rights of the President.

You do not have to push and dictate. It is my prerogative right, President Jokowi said to the reporters.

The President also expects all ministers to work (hard) in order to make programs and activities of the ministries run well and budget absorption can increase until year-end.

Meanwhile, in his remarks at the event, President Jokowi also said that Indonesia must prepare human resources to be able to manage data that keep increasing and said that synchronization among the ministries is also one of the Governments attentions in the infrastructure development.

The President cited an example that if the Government continues to promote development, marketing and promotion sectors must be implemented as well.

Ministry of Public Works and Public Housing should know which sector that can be explored. Besides paying attention to good marketing and promotion, we must also pay attention to the products, the President said, adding that the products which the Presidents means are clean water, four-star hotels, and roads.

We have 10 tourism destinations that we want to work on. It means the products of the Ministry of Public Works and Public Housing includes marketing, while matters related to promotion are under the authority of Ministry of Tourism. There must be an integration among ministries, the President said.

Our future intention is balance between regions that could be achieved through improvements in several sectors, the President added.