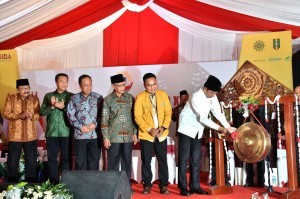 The congress was attended by approximately two thousand of the IPM members students.

President Jokowi in his opening remarks said that in the last two days, he had been monitoring the conference preparations and was impressed by the creativity shown by the IPM students. I saw the video invitation (addressed to the members of the IPM) to attend the conference made by the IPM of Central Java Branch using the cover of the (2018) Asian Games theme song. In my opinion, this is very creative, the President said.

The progress of the IPM itself, President Jokowi continued, is fairly extraordinary.

The IPM has given birth to many prominent figures that contributed greatly to the people, such as Haedar Nashir (current Chairman of Muhammadiyah Central Executive Board) and Busyro Muqoddas (former commissioner of the Corruption Eradication Commission).

There are also names who are active in political parties. There are Raja Antoni (Secretary General of the Indonesian Solidarity Party), Anis Matta (former chairman of Prosperous Justice Party), and Budiman Sudjatmiko (lawmakers of the Indonesian Democratic Party of Struggle Faction), the President added.

President Jokowi also expressed belief that the contribution of those names will be continued by today’s IPM students. All of you who are here are the next generation, he said. (BPMI/EN)