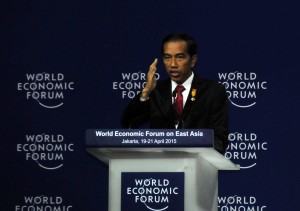 WEA-EA held in Jakarta will discuss the regional economy, particularly in East Asia, and will last until April 21.

On the occasion, President Jokowi had the opportunity listen to the presentation developments in economic conditions, From a number of participating countries of WEF as Russian Prime Minister Arkady Dvorkovich, Deputy Prime Minister of Vietnamese Nguyen Xuan Phuc, and Cambodian Prime Minister Samdech Techo Hun Sen.

The World Economic Forum is an international organization committed to improving the quality of life of nations through cooperation between the government and the private sector in the spirit of global citizenship.

This forum brings together business people, politicians, academics and other community leaders to shape the global agenda in the scope of regional and industry, and is an independent, non-partisan and not tied to the interests of a particular group.