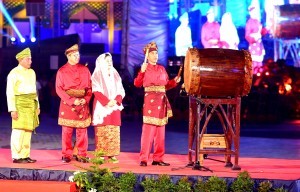 The President added that all of us certainly do not want disasters to happen, either in the form of natural disasters, diseases, accidents, or other calamities. However, according to him, calamity is a test for the faithful and Islam teaches Muslims to be patient, do our best and be vigilant in the face of every disaster.

On the occasion, President Jokowi also invited all those present at the event to jointly recite Al Fatihah (the first chapter/surah of the Quran) dedicated to victims and surviving families of the disasters.

In the meantime, Governor of North Sumatra Edy Rahmayadi reported that the 27th National MTQ is attended by 1,550 delegates from 34 provinces of Indonesia.