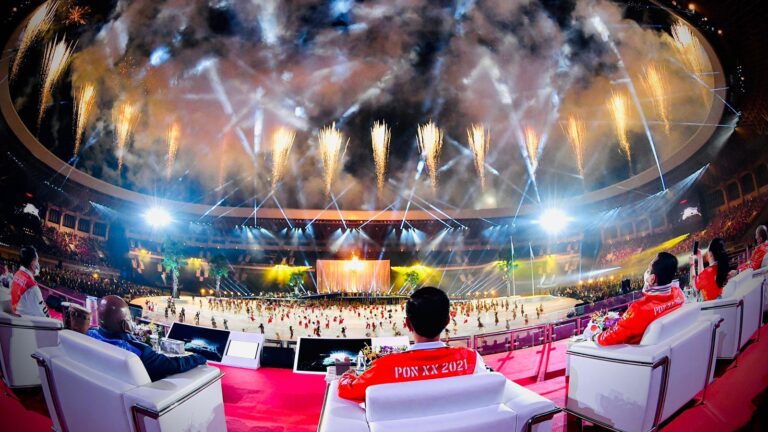 “By saying bismillahirrahmanirrahim, in the name of God, the Most Gracious, the Most Merciful, I officially declare the 20th Papua National Sports Week open,” the President said.

The PON is scheduled to take place from 2 to 15 October and is held in four regional clusters, namely Jayapura city, Jayapura regency, Mimika regency, and Merauke regency. This is the first time this national sporting event is held in the eastern part of Indonesia.

“We are proud to open the 20th PON, the first National Sports Week to be held in Papua,” said the President.

The opening of the PON began with the welcoming of the President. Then, the event continued with welcome dance performances as well as musical performances from several artists, followed by a parade of athletes and officials from 34 provinces.

The opening ceremony also displayed creative presentation and cultural performances as well as the ignition of the PON’s flame accompanied by the theme song of the National Sports Week, Torang Bisa.

As reported by the KONI Chairperson, the 20th PON is attended by contingents from 34 provinces with a total of 6,116 guest athletes and 923 Papuan host athletes. The athletes will compete in 37 sports consisting of 56 disciplines and 681 match numbers. They will compete for 681 gold medals, 681 silver medals, and 877 bronze medals.

The matches are held in 45 arenas or venues of national standard or international standard, including the Lukas Enembe Stadium. The event will also be carried out by implementing strict health protocols, Marciano said. (FID/UN) (FI/MMB)