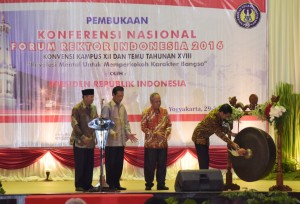 The Conference is held as a form of commitment to improve universities in Indonesia in order to increase the number of good quality human resources and to provide solution to the national development.

FRI Chairman, who is also the Rector of UNY, Rachmat, expressed his gratitude for the presence of President Jokowi in the inauguration.

We hope we could maintain the trust and be able to give great contribution to the national development, Rachmat said.

On the Conference adopting the theme Mental Revolution to Strengthen National Characters,  Rachmat called on universities to contribute to the national development, and to shape Indonesian people who have character and dignity.

On that occasion, the President reminded that we are now entering the era of competition.

Many people overlook it, that is why I need to remind it, President Jokowi said.

The President said that the current situation needs speed, both speed to decide and to respond.

Because the world changes not in days, but in hours, in minutes, in seconds, and we do not know where it leads to, the President firmly said.

The President also called on universities to conduct research that can be implemented on the ground.

It must bring benefits to the people, not for us, not for the university, President Jokowi firmly said.

Therefore, the President gives his support to universities to develop researches, as well as a competitive downstreaming in order to meet the demand of market, industry, and competition.

I really appreciate universities that have already implemented the downstreaming on agro-industry, pharmacy, health, manufacture, engineering, technology informatics, renewable energy, and culture and art as well, the President said.

The President also told members of the forum that there are many measures to be taken if the results of the researches is concrete, real and bring benefits to the country.

The President also hopes universities could have partnership with the Government, state-owned enterprises, and business entities.

Underdeveloped, remote, frontier, and border areas also need assistance form the universities, both to improve their managements and to assist them, the President added.

Therefore, he said, Indonesia can work and move together and create a better competency, productivity, and work ethicc and it all can be changed.

Once again, we are now competing in speed with other countries. This is the era of competition. Once again, I asked to continue conducting researches which could strengthen the innovation and competency, President Jokowi said.

The 12th  Campus Convention and the 17th Annual Meeting were also conducted in the conference which was held on  29-31 January 2016.

In his working visit to Yogyakarta, the President also visited Borobudur Temple and conducted a Limited Meeting on the acceleration of tourism destination development.

In the event, the President was accompanied by Minister of Research and Technology and Higher Education Mohamad Nasir, Minister of Home Affairs Tjahyo Kumolo, and the Governor of Yogyakarta Sri Sultan Hamengkubuwono X. Rectors from the universities around Indonesia also attending the event. (FID/DKP/EN) (RAS/EP/YM/Naster)