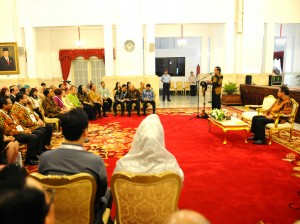 It takes consistency and a sustainable way, the President Jokowi said during the opening of the 2015 Public Relations Officers National Convention at the State Palace, Jakarta (18/11).

On that occasion, President Jokowi asserted that for a government, trust is a must because with trust, the government could carry out development in the next periods.

To the participants of the convention, President Jokowi said that development and transformation of the media is rapid and the changes that continue to happen currently must make public relation relations able to develop.

The President also said that currently, peoples journalism continued to develop and public relations officers must continue to keep up with the development.

Now we have easy access to information. Anyone can convey much information to anyone else with any media that sometimes contain incorrect information. Therefore, ministries and institutions, especially those in charge of public relations affairs, must not easily trust the information. Otherwise, it can bring long-term impacts, he said, adding that those are things that must be faced in the future and public relation officers must be ready to face them.

The President went on to say that the speed of real time information with all the interests in the mass media and social media makes information cannot be restricted and stopped. At the same time, he added, the public also becomes more critical.

Under the situation, the President, added, public relations officers need the ability to listen and to have good dialogs in order to study the trend of the development of mass and social media, so that trust and reputation could be achieved.

The convention, which adopted the theme the Journey, PR journey the sustainable to trust and reputation, was held until Friday (20/11).

Also attending the opening ceremony were Minister of Communication and Information Rudiantara, Minister of State Apparatus Empowerment and Bureaucratic Reforms Yuddy Chrisnandi, Presidential Chief of Staff Teten Masduki, the Honorary Council, the Advisory Board, and Central Executive Board of the Public Relations Association of Indonesia (Perhumas), as well as public relations officials. (FID/RAH/ES) (EP/YM/Naster)