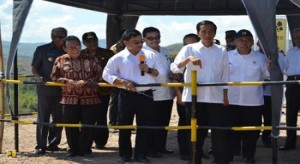 “We look the tunnel already translucent and have been completed. Originally submitted to me that it would be completed in five years, but then can progress become three years only, wfy ?, that because they works marathon. It shows that we are serious about completing the infrastructure,” President Jokowi said when reviewing the dam’s development, Saturday (25/7).

President Jokowi who accompanied by First Lady Iriana said, in NTT the key is water. If there is enough water, further Jokowi, then we speak what we want to plant, whether cassava, maize, sugarcane, even the livestock could also be.

Minister of Public Works and Public Housing (PUPR), Basuki Hadimuljono in the report said, the construction of Raknamo Dam currently no constraint because people can perform well. For example, for the entrance to the dam the people instead handed their lands and there are approximately 25 tombs moved and well taken care of.

The construction of Raknamo Dam in Kupang Regency, East Nusa Tenggara, which began December 20, 2014 and is targeted for completion in 2017. The capacity of the dam is 14.09 million cubic meters and Provision of clean water for the capital city of Kupang 100 liters per second.

Basuki also said, that the government program through cabinet work, cq. Ministry of PUPR in the next five years there are 49 new dams will be built.

“In 2015 there are 13 dams one of them is the Raknamo dam. From the 13 dams, Raknamo dam has the most rapid progress and hopefully in 2017 has been completed,” Basuki said.

President Jokowi on the occasion was accompanied among others by the Minister of Agrarian and Spatial Ferry Mursyidan Baldan, Minister of Agriculture Amran Sulaiman, Minister of BUMN Rini Soemarno and Governor of NTT Frans Lebu Raya. (Biro Komunikasi PUPR/ES)