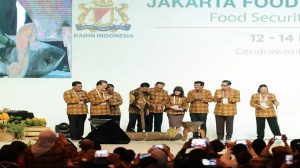 President Jokowi using a pestle to pound rice as a sign of the opening of the Jakarta Food Security Summit, at the JCC, Thursday (12/2)

President Joko Widodo (Jokowi) expressed, based on his visit to the affected areas, he more  knows the terrain in the country, now he believes that food self- sufficiency, food security and food sovereignty will be achieved within a time not too long, approximately 3-4 coming years.

“More I know the terrain, more I convinced that food self- sufficiency, food security, food sovereignty can be achieved within a short time. Our estimates of 4-5 years could be achieved”, President Jokowi said, when opening the Third Jakarta Food Security Summit (JFSS) held at the Jakarta Convention Center on Thursday (12/2) morning.

According to the Head of State, from the dialogue with farmers in the area of the exhibition, he received an encouraging report related to the increase in food production. That first (production) 2 tons, said Jokowi, up into 4 tons, which at first 6 tons and then to be 8 tons, which at first 1.5 tons now to be 3 tons. The multiples such as the figures had been exist for example

“What does it mean? If already have the examples, who will accompany already exist, who took the result or farmers product already exist, we will expand this partnership, nationally”,   Head of State said. Therefore, according to the President Jokowi, he will invite farmers to talk to, fish farmers, ranchers, and the Chamber of Commerce (Kadin), and the entrepreneur partners, we will talk to.

The opening ceremony of the JFSS then forwarded to the panel discussion event, entitled “Cooperative Empowerment as a Key to Success in the Field of Agriculture, Animal Husbandry and Fisheries”.

On the second day of the JFSS will be held a panel discussion entitled “Financing Innovation Module through Cooperatives in Agriculture, Animal Husbandry and Fisheries”.

In addition, also held a panel discussion entitled “Spatial Certainty and Land Availability for Food Security, discussion on Agriculture, Animal Husbandry, and Fisheries that sustainable. The event ended with a seminar recomendation on food security by the Chairman of the Indonesian Chamber of Commerce to the Vice President Jusuf Kalla. (WID/Humat Setkab/ES)