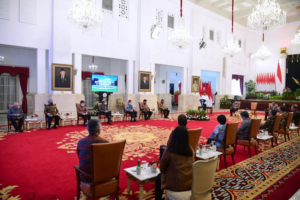 President Joko “Jokowi” Widodo has expressed his appreciation to banks for increasing credit for Micro, Small, and Medium Enterprises (MSMEs), according to Coordinating Minister for Economic Affairs Airlangga Hartanto.

However, the President, Airlangga added, also expressed hope that the credit can be increased to 30 percent nationally in 2024.

Airlangga also pointed out that the 30 percent target set by the President is an accumulation of credit provided by all banks nationally, not respectively, adding that the President understands that each bank has its own specialized business.

“At this moment, Bank Rakyat Indonesia (BRI), for example, has reached almost 70 percent of credit (for MSMEs). Meanwhile, some banks are specialized in providing credits to corporations. However, the President orders that the total credit provided by all banks reach 30 percent. So, it does not mean that each bank should reach 30 percent because each bank has its own specialized business,” he added.

During the meeting, the bank CEOs also offered suggestions on reserves for non-performing loan (NPL). The CEOs said that it is important to harmonize accounting standards that are based on the Indonesian Financial Accounting Standards (PSAK) to deal with the NPL issue.

“Until now, some banks nationwide have reserves around 150 percent on average. However, concerning the reserves, it is important to conduct harmonization between PSAK-based accounting standards and taxation because it has effect on tax counting. The President wants to further discuss this matter.

Coordinating Minister of Economic Affairs added that another issue discussed in the meeting was that of credit policies implemented in state-owned banks. In this regard, the President asked related parties to follow up the issue, the Minister added.

“MSMEs implore banks to write off their NPL whenever disasters occur and affect their business. However, state-owned banks cannot do that; hence, MSMEs cannot have their NPL written off,” he remarked. (Bureau of Press, Media, and Information of Presidential Secretariat/UN) (AW/EP) (AW/EP)