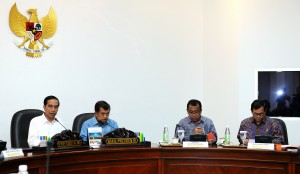 President Joko Jokowi Widodo has called for acceleratetion of the construction of power plants and oil refineries because, according to the President, the opportunities are open and there are many investors want to invest to Indonesia.

The question now is whether we are ready to speed up the services or not, so we will not miss the opportunity and we can take advantage of it and implement it on the grounds, President Jokowi said during a limited meeting at the Presidential Office on Thursday (3/12) morning.

The President hopes by the end of 2019, electrification ratio can reach 100% as expected.

I have requested my administration and State-Owned Enterprises (BUMN) to accelerate the construction. There is no reason to hold the project any longer, President Jokowi said while asking the reports of the electricity and the progress of oil refinery construction.