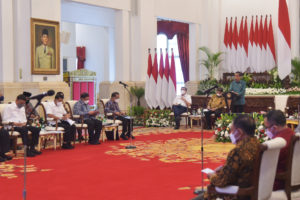 “First, the anticipation of disasters. We must pay close attention to extreme weather, things related to traffic safety, and weather information from the BMKG as early warning and disaster mitigation in all disaster-prone areas,” the President stated at a plenary cabinet meeting.

Second, regarding economic conditions next year.

The President reminded his ranks to remain careful and stay alert over financial crises, including a probable decline in exports and a food crisis.

“Stay alert to this matter because it can trigger social and political issues. Do the math accurately for rice assistance. Do not miscalculate and we end up having no rice reserve stock. Or at some point, if the traders notice that we run out of rice stock, rice prices will surely rise. This is the law of supply and demand,” he said.

The President went on to say any policies related to the lives of many people must be well calculated in the midst of global situation that is still not in a good state.

“The key is a collaboration between ministries and agencies. Do not get caught up in sectoral egos. Do consolidate the data, policies, and also implementation,” he added.

Third, regarding grand strategy in the midst of global economic turbulence.

“I’d like to remind all of you to improve consumption. Monitor and control the government spending in the State Budget, the Regional Budget, and the State-Owned Enterprises (BUMN) Budget to increase public consumption. Therefore, the purchase of domestic products is non-negotiable,” he asserted.

On that occasion, the Head of State also urged all ministries, institutions, and regional governments to immediately proceed their capital spending and social spending.

Regarding inflation, he has also ordered Minister of Home Affairs Tito Karnavian to continue conveying inflation control in regions to regional leaders.

“There are several regions that have not carried out inflation control. Please, warn them. And, we can clearly see that inflation in the last three months which stood at 5.9 decreased to 5.7 and ran down to 5.4. The regions have already controlled it, but another warning may work so that every region does it. That way, I will see the figure going down again and again,” he stressed.

Apart from consumption spending and inflation control, the President also underscored that investment is also the key to economic growth in 2023.

“It cannot be negotiated anymore since it will greatly affect economic growth. We will continue industry downstreaming consistently. This morning, we talked about bauxite. We will immediately decide when we will ban the export of bauxite raw materials,” the President said.

Regarding the increase in exports, the Head of State ordered relevant ministries to see market opportunities that have the same demand.

“If the demand of our largest export markets drops, both from China and the US, Ministry of Trade should be able to change the market to other countries that have roughly the same demand,” he said.

According to the President, Indonesian products have great potential in India but no approach has been made yet. The President also said that foreign tourist visits must be encouraged, especially for priority destinations such as Labuan Bajo, Mandalika, and Borobudur.

Concluding his remarks, the President urged that anticipation and mitigation measures for COVID-19 handling must still be taken despite the decrease in daily cases.

“As of December 5, positive cases have risen to 6,000 or 7,000. Yesterday, I saw daily cases already stood at 2,234. Then, booster vaccination must still be accelerated so that our community’s immunity will improve,” he conclusively remarked. (FID/AIT/ST) (RIF/HD/MUR)