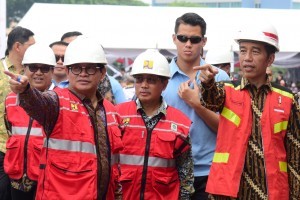 In the wake of the Lion Air JT 610 crash, President Joko Jokowi Widodo said that Low Cost Carrier (LCC) airlines exist in many countries. The most important thing, according to the President, is improving passenger safety management.

The statement was made by the President when answering questions from the journalists on the relation between the Lion Air crash and its Low Cost Carrier (LCC) status.

In the meantime, Ministry of Transportation through the Directorate General of Civil Aviation c.q. the Directorate of Aircraft Airworthiness and Operation (KUPPU) has instructed two airlines namely PT Garuda Indonesia and PT Lion Mentari Airlines to conduct special examination for their Boeing 737-8 Max aircrafts. The examination is conducted in response to the aforementioned Lion Air crash.

Minister of Transportation, after accompanying President Jokowi to inspect the Integrated Evacuation Center for the Victims of Lion Air JT 610 in Tanjung Priok Port, Jakarta, Tuesday (30/10), said that the results of the examination will later be given to the National Committee for Transportation Safety (KNKT) and will be used as additional data about the Plane crash.

“We will analyze the examination result and will give the result to the KNKT. It will be used by the KNKT to determine the cause of the accident,” the Minister said.

The result of the examination must be immediately reported to the Directorate of Aircraft Airworthiness and Aircraft Operation, Directorate General of Civil Aviation, to be evaluated.