President Jokowi: Patients to be Flown to Makassar and Manado to Receive Intensive Care 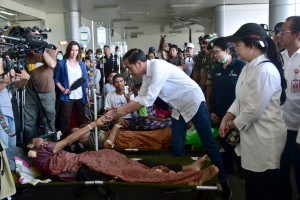 In his second visit to the quake-affected areas in Palu, Central Sulawesi, President Joko Jokowi Widodo met with the displaced and wounded victicms who were being treated in a makeshift hospital at Mutiara SIS al-Jufri Airport, Palu, on Wednesday (3/10) at around 10:15 Central Indonesian Time.

The President met with approximately 23 patients and was seen listening directly to complaints from them as well as trying to encourage them to remain patient. He went on to explain that those who need treatment immediately will be flown to Makasar, South Sulawesi and Manado, North Sulawesi to receive more intensive care.

“We will finish this issue one by one, we will bring you (the patients) to Makassar,” the President said.

Afterwards, President Jokowi continued his activities to see firsthand the search and resuce efforts made by relevant ranks and the repair of damaged public facilities in a number of locations.