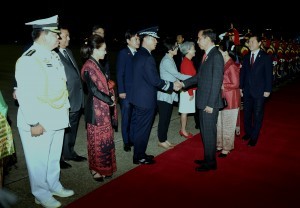 The visit of President Joko Jokowi Widodo to South Korea is a reciprocal visit after President Moon Jae-in visited Indonesia last year, according to Minister of Foreign Affairs Retno Marsudi after welcoming the President and his entourage at Lotte Hotel in Seoul on Sunday (9/9).

This year is important for both Indonesia and South Korea since we commemorate 45 years of diplomatic relations between the two countries, the Minister, which was accompanied by the Indonesian Ambassador to South Korea Umar Hadi, said on her press conference.

The next day (10/9), according to Retno, will be a very busy day for President Jokowi because there will be approximately ten scheduled agendas for him to attend.

Starting in the morning, there will be a one on one meeting with entrepreneurs/private companies here and continued to a business forum meeting, the Minister said. There will be also a welcoming ceremony on the scheduled agendas, which will be a friendship talk between the President and the First Lady of the two countries.

Furthermore, Retno said that tomorrow President Jokowi is also slated to put a wreath on the heroes cemetery and have a lunch at the Indonesian Embassy as well as to launch an Indonesian citizen protection portal.

Moreover, the President will hold a limited meeting with President Moon and followed by a plenary and a joint press conference and then a dinner, the Minister said, adding that both countries in the last year posted a significant increase in trade of 19.2%.

Meanwhile, Ambassador Umar Hadi said that on Memorandum of Understanding to be signed, there are several sectors including automotive, metal industry, chemical, garment, foot ware, and start-up.

Accompanying the President during the state visit were Cabinet Secretary Pramono Anung, Minister of Foreign Affairs Retno Marsudi, and Head of the Investment Coordinating Board (BKPM) Thomas Lembong. (DNS/EN) (GWH/YM/Naster)