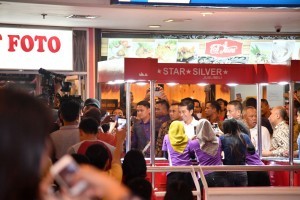 President Joko Jokowi Widodo pays an impromptu visit or blusukan to Plaza Pekalongan located at Jalan Nusantara, Pekalongan, Central Java, on Sunday (8/1) evening after making a series of working visit. Arrived at about 8 pm Western Indonesian Time, President Jokowi immediately went to several corners of the plaza. The President was enthusiastically greeted by the crowd who were spending time on weekends.

Despite under the guard of the Presidential Security Detail (Paspampres), President Jokowi still gives the opportunity to citizens to shake hands and take pictures together.

On the occasion, President Jokowi bought two sarongs, one of which is white plain, while the other has a songket (traditionally woven fabric) motif.

During attending a series of working visits in Pekalongan, President Jokowi wears sarong combined with a suit as his official clothes. This is because the event was located in a number of pesantren (Islamic boarding schools) in the city of Pekalongan. “I have just been to two pesantren,” President Jokowi told reporters.

Before returning to the hotel, President Jokowi and his youngest son Kaesang Pangarep took time to have dinner together at a restaurant in the Plaza Pekalongan.